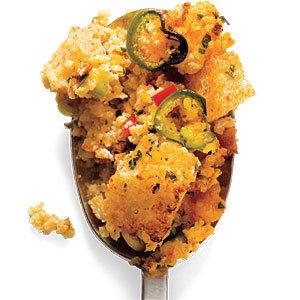 Spicy Local Chorizo Stuffing
Get your chorizo from Golden Fleece Farms.  If you don’t want to make your own cornbread, buy some crusty Stone Hearth or Kapnick’s cheese bread!

Turkey By the Numbers: A Thanksgiving-Day Scorecard

According to the USDA more than 244 million turkeys were raised in 2010 and an estimated 46 million of them were eaten at Thanksgiving. This year that number rose by 2% to 248 million and about 47 million respectively. With the average weight of the turkey a touch over 16 pounds that means a whopping 750 million pounds of turkey consumed at yesterday’s Thanksgiving meal. Come again? Seven-hundred-fifty million. Wow.

When it comes to calories, white meat has fewer calories than dark. The turkey contains about 30% dark meat and for those who favor the more tender meat, in addition to consuming more calories, there is more fat in dark meat.

This year forecasters predicted a banner year for cranberry production. According to the USDA, 7.5 million pounds of cranberries will be harvested in 2011 with the most being produced in the state of Wisconsin followed by Massachusetts. This will be the second largest production of cranberries on record.

With 2.4 billion pounds produced in the U.S., it’s estimated that Americans eat 5.3 pounds of sweet potatoes each year. How many are eaten on Thanksgiving? The numbers aren’t there, but based on our own holiday meal, we’d venture to say an average of 1/2 lb. pound per person which would amount to millions of pounds of sweet potatoes devoured last night.

Despite all the feasting, if your house is like ours, there are plenty of leftovers. But before you make that post-turkey day lunch, be sure you’ve followed the proper food safety rules.

Golden Fleece Farm, LLC: Assorted grass fed beef products (no GMO) at 3.5-4.5 pounds at $5 per pound (all out of chicken and oxtail).  This week, they have both fresh and cured cuts: sausage, chorizo, brats, chops, ribs, ham steaks and on and on. The pigs have been raised on  organic feed.

For all the best in-season foods and recipes, stay tuned for the weekly installments of the