Meet the family behind Elysium Soap, this week’s featured vendor at the Saturday Farmers Market. 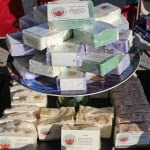 The Chelsea Farmers Market takes place each Saturday at the Palmer parking lot from 8 a.m.-1 p.m.
Each week, Chelsea Update is profiling one of its vendors.
Andi Philippe had been making soap for herself for about seven years when she came to the realization that a small batch was enough to last her for six months.  “I used to work at Whole Foods and bought soap there and still wanted nice soap when I left,” she explained. Along with her husband, John Luther, the couple began selling the homemade soap at the Saturday farmers market this season at their booth, Elysium Soap.
They also sell lotion, lip balm, and bath balm.
“We love living within walking distance of the market,” said Phillipe, who adds that they have been shoppers at the market for several years.
“Chelsea is a close knit community,” said Luther. “Our kids have thrived here, and we’ve had a good experience at the market.”