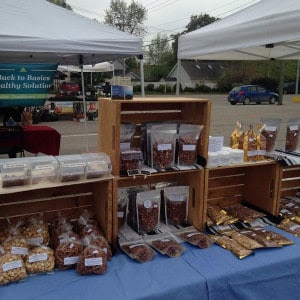 By Stephanie Willette
Janet Brown has been running her business, Janet’s LLC, for about 15 years.
A vendor at the Bushel Basket Market on Wednesdays, she sells cards, jams, nuts, pretzels, dolls, sweets, dried fruit and nuts, Dammit dolls, caramel corn, lemon eucalyptus lotion, and herb rub.
Janet started out at Kerrytown in Ann Arbor with spices. Then she expanded into peanuts and nuts because no one else was doing it.
“I get bored,” she said, “which is why I have such a variety.”
Looking at her stand, one can see she has a huge creative side in the uniqueness of products she offers.
Janet’s LLC can be found at the Bushel Basket Market, at the Henry Ford Allegiance Hospital in Jackson, and in late September, she will be at the market in Greenfield Village. Around the holidays she expands her selection to include chocolate dipped items, something you won’t want to miss.